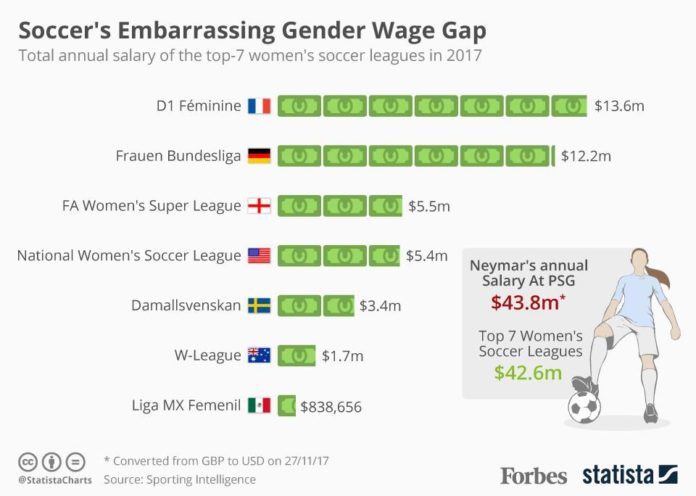 “No FA-affiliated club was permitted to allow women to use its facilities.” David Goldblatt, The Ball Is Round.

What were they afraid of? Would women’s cooties spread and seep into the grass? Would the men who played after get these cooties and then god-forbid play like a girl? While today this notion seems ludicrous, inklings of the notion are still prevalent today. 94% of England’s playing fields do not have a women’s locker room. Most women’s top clubs do not share the same facilities as the men and are usually placed at a much lower level of importance for the club.

Sexist rhetoric is still present today just consider what the UK Football Association tweeted in 2015 that once the World Cup ended, the women’s team would return to being “mothers, partners and daughters.” As though when they play football they aren’t these things. Or because they play soccer their home and family life stops? Nobody writes that after the men’s tournament.

Today feminism is all the rage. The word is thrown around regularly to the point where I’m not even sure what is feminism and who is a feminist. What I am sure of are numbers. Women’s wages in sport have been gradually rising, 35 out of 44 sports that award prize money are now paying equally. Yet football is nowhere near that. A recent study by Women on Boards highlighted that not only did the US women’s national team receive a fraction of the amount the men’s game gets, female football players also received four times less than their fellow male counterpart in the World Cup, even though the men lost in their first knockout match and the women have won numerous times.

The gap becomes even bigger if the total payout is considered. The prize money in both tournaments is determined by Fifa, that awarded $15m for the Women’s World Cup and $576m for the men’s, almost 40 times larger. And while former England captain Wayne Rooney earned £400,000 a week, Steph Houghton, the women’s captain, earned around £1,600 a week.

It’s not just the wage gap that demonstrates the massive competitive difference. Most clubs don’t have a women’s side and those that do are not likely to let the women use the first team’s men’s stadium or training facilities. When the women are allowed to use the stadiums, it is usually only for big games like champions league or certain finals. The women do not have the same sponsorship deals as the men even within the same club. Sometimes they have to buy they’re own training gear.

Not Just On the Field

Football in England is not just reserved for the boys on the pitch but off it too. Women who work with the men’s clubs or journalism and media are also under represented or when they are represented receive harassment or unfair treatment.  A study from 2015 shows that women who have been sexually harassed and those banned from a certain area of the game on gender have gone from “7 to 15 per cent and 7 to 19 per cent, respectively, in the latest survey of 505 female players, coaches, match officials, administrators, doctors, physios, lawyers, agents, and media, PR and sponsorship professionals.” In an age where feminism is all the rage and equality is the popular ticket how can these numbers be going up?

Across the pond the women fair no better.

Though the women have four gold medals, 3 World Cup titles and a whole lot of other trophies on the mantle, the players on the United States women’s national soccer team earn less money than men doing the same job. The inequality is evident when taking into account the revenue of 2015, the women had a profit of $6.6m and the men were right under $2 million. Yet the women didn’t see any extra benefit to bringing in more money. While the English example is very clear that the disparity is quite large, the US case is a bit more particular and perplex.

They say women’s football is the fastest growing area in the game. And from the bottom of my heart I hope that’s true. But from a numbers perspective the gap is so big that any growth is going in the right direction. And for now, I’ll take any progress no matter how little.