Are players just commodities to clubs? Are they just objects to be bought and sold at the clubs whim? Is this ok? Or do clubs have more responsibility to a players personal development and not just their sporting success?

Clubs buy players from all over the world. Take them from their countries, from their homes and families to play in a strange place for strange people. For those that succeed the road is paved with gold. But is gold the only thing the club owes these young men? Is there any underlying moral agreement to take care of these boys and help them become men?

Recently at a dinner with friends we spoke about a player and his possible transfer to a foreign club, and the repercussions on the player and the club, if a certain player were to leave our club. Players are only on the field a few hours per day. Most clubs insist the players respect the institution. They must take care of themselves outside of the training center. They need to watch what they eat, get proper rest, and live their life in such a way that it benefits themselves and the clubs?. But what is eating properly? What if you come from a country that doesn’t eat 3 square meals a day at certain times but only when you are hungry? How much rest? Does rest mean sleeping in? Or waking up early? Sitting on the couch playing FIFA all day? At the professional level players are already supposed to know this. But what if they don’t? What if they have never been taught?

From the club’s perspective, teaching players these simple tasks would likely produce better results on the pitch and would definitely have a positive ROI. Others can argue the constant turnover at clubs means they don’t have time for this. But what about a human perspective. Does the club not owe these players the same institutional respect they ask of them? Should these boys not grow into citizens of the world rather than just commodities to be bought and sold on the football market?

Let Me Introduce You To John

To explain this situation better I have decided to share with you details about the player. I have changed personal details about this player, name, leagues and clubs to preserve his identity, however he is a top division player in a top 5 league currently playing in the World Cup. 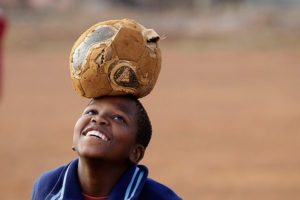 John is originally from a poor African country, he grew up playing for a club connected to it’s foreign club in England. At 17 the first team brought John to England. He has little education and is not very worldly.  He speaks English though he prefers to speak a version of English with the dialect of his village. The boy is an amazing player and after his first season was sold to a top 5 team in the Premier League for over £15 million. He found a bit of rhythm in this new club and again is having another successful year. He comes to practice everyday in a taxi, because he doesn’t have a driver’s license. His mother comes over from Africa often to cook and take care of him. The club’s team manager organizes many many things for him and his family. Some staff in the club have taken it upon themselves to start to teach him some things. One staff member has even given him driving lessons. He regularly sends large sums of money home monthly for his mother to distribute around the village. He is so valuable to the club that when he was injured right before Christmas they sent a staff member back to Africa with him to make sure he kept up with his rehab and his ‘return to play’ training schedule.

Who Controls His Money?

The consensus around the dinner table is that he has no idea the state of his finances, nor does he know how to do simple tasks like pay his rent without the club’s help. When he moved into his new apartment the club didn’t realize they needed to tell him to buy a shower curtain. Now he continues to flood his bathroom every time he showers. When he moves out he will have to cover the cost of repairing the entire bathroom. To many this little task seems obvious, but he honestly has no idea. Some of you might be thinking, “ya right, everyone knows that.” Or “he just doesn’t care, he does what he wants because he can pay for his actions.” I promise you, it’s not the case. A friend of mine actually ran into this players wife (a girl from his village who has less experience in the world than himself) at a game in mid-January. The weather was in the low single digits and his wife was wearing ripped jeans and just a little hoody jacket. My friend on the other hand had on, jeans over spandex, an undershirt, sweater, winter coat, scarf, beanie and a blanket. Her outfit was not a fashion choice, she was not freezing to be stylish. She can clearly afford whatever designer winter coat is on the market yet again, they just don’t know these things. Is it the clubs responsibility to have a representative teach them about the climate in this new country? How to properly outfit the apartment and other things?

Throw Him To The Wolves

His transition to this new country and culture has not been easy but it’s coming along. For him to be sold right now would throw him into a new country, with a new language and possibly hinder his growth as a player.

Recently there are rumors swirling around that an Italian club wants to buy him for double what the club paid, possibly more, depending on his performance in Russia. And this is where the discussion comes in. Another year in his English club could not only improve his skills on the field but also allow him a little more time to grow up in a culture close to his own and in an environment that has started to help him.

Should the club sell him?

Is his personal growth their responsibility?

Is football just a business?

Does his agent have a moral obligation to take all this in and advise his client to ‘grow’ with this club a little more? Or is it in his best interest to move clubs and get a massive pay day, since the fickle game has no guarantee for any player that they will stay healthy enough for another season?

Or should the club have a ‘big brother’ on staff? Someone who goes over weekly and checks out the apartment. Gives advice about what could be done better. Shows the player where to grocery shop, give the player a couple simple cooking lessons. Explains the importance of diet and rest and how it affects performance on the field. Maybe even a few finance lessons so that simple tasks can be performed by the player without others help.

I believe it is important for clubs to take on this responsability. But I believe this a very particular role. Some players are set in their ways but could help from a little guidance. A person forced onto players to change their cultural ways will not work, nor someone telling them what they have to do. A little old lady who helps out might be taken adavantage of. I have quite a few ideas I’m playing around with on how to solve this dilemma. Stay tuned to IntelligentFC if you want to find out more with my follow up article.

I’m really interested in hearing your thoughts on this subject. Please leave me some comments. I’m especially interested to hear if anyone has a solution to this commodity or citizen of the world problem