Last weekend I watched Arsenal vs West Ham game when commentator announced: “In the thee EPL matches that were played at the same time, there were 4 red cards”. This is sure an anomaly, but it made me wonder. How often are players sent off? More importantly, how do the chances of a team change if one of the players is sent off because of a red card? Is it really that much more difficult to play with 10 men against 11? It turns out the difference is very significant. I have done some digging around and would like to share the findings with you.

Some of you who have been following the blog know about my football prediction model that accounts for player salaries when measuring strength of a team. So if we are going to be looking at red cards, we should be looking at events where the teams who are fairly equal in strength, i.e. their player wages are about equal.

Red cards are given out 20.1% of matches! Or in every 5th game. Much more often than I thought.

Impact of the red card on number of goals scored

First let’s look at the regular game when 22 players finish the game. In a game between equals, the home team scores an average of 1.46 goals per game and away team scores 1 goal on average. Take a look at the table below. Meeting of the who equal clubs highlighted. When a team is twice as strong, they are expected to score more than two goals, but lets concentrate on fairly even teams. 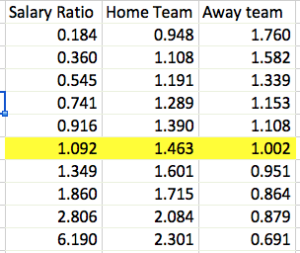 How does that change if a home team gets a red card? By looking at game where only one red card was shown we can easily compare. With one player sent off, home team is expected to score only 0.94 goals and concede 1.68 goals on average. In other words, getting a red card at home, equals a disadvantage of 1.2 goals! That’s pretty significant. Here’s the full table:

What happens if the away teams get a red? This time we will look at the matches where only one red card was given – to the away team. It turns out that visitors have a much smaller disadvantage if a player is sent off – only .58 goals.

How does a red card change the probability of winning or losing a game?

Once  again I looked at even teams salary wise. Without any cards the home team wins 48% of the time, ties 28.7% of the time and loses 23% of the time. Take a look at what happens if one of the teams gets a red:

The Home team is pretty much screwed. The probability of winning the match goes down from 47% to 18%! They are 3 times less likely to win a match. The odds of a draw are impacted as well. It looks like the away team is much more inclined to take a risk and go for 3 points.

In the event away team sees a red card, they get a much smaller disadvantage. The odds of a draw pretty much the same, but the probability of away win go down from 23.5% to 14.1%.

Of course the model does not take into account when the player was sent off. Those that got sent off towards the end of the game will likely impact the result much less. But nevertheless the results are interesting.