What’s in a name?

Proven from history and recent pop culture; with Shakespeare’s ‘Romeo and Juliet’ to Beyoncé ‘Say My Name’ it´s not just about what we call ourselves that matters but what we call things as well, like stadiums. Stadiums are synonymous with the teams that play there. They usually have multiple names, one given by the owners or city where it resides, and another given by the loyal fans that go there to worship every Saturday/ Sunday and sometimes in the middle of the week; think Old Trafford affectionately called “Theatre of Dreams.”

Today the stadium name has become another commodity to be bought and sold at the club’s whim to bring in more revenue. Think Allianz Stadium in Germany, Emirates in England and now Wanda in Spain. Some clubs sell the rights, start the process of rebranding everything only to decide a year later it was a bad idea and change it all back, 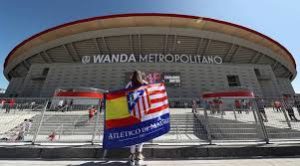 like at Saint James Park in Newcastle, England. But like Shakespeare so eloquently wrote “What’s in a name? That which we call a rose, by any other name would smell as sweet.”So, I ask, what does it matter what a stadium is called? Does the team inside not play the same? Does the history get erased and the magic die when it falls prey to capitalism and the name is chiseled off? To understand where the money comes from, take a look here.

The naming of the stadium after a sponsor is not necessarily revolutionary it’s been happening for over a decade and went mainstream in American sports in the 90’s. What’s interesting now is that some stadiums, like Emirates for example, might soon be changed again with the sponsorship deal almost over and then what happens? In Portugal the stadium that holds the biggest club in the country is technically called Estádio do Sport Lisboa e Benfica but everyone still refers to it as the old name Estádio da Luz, or Stadium of Lights. This name awakens the imagination. Games under bright lights, Sunday evening outings with your dad and so much more. Even on google the new stadium is referred to by the old name. So, what would happen if they sold the naming rights? Nothing really. Everyone would keep calling it Estádio da Luz, even if when you walk up to it you read something else.

My overall opinion is that a name is just that, a name and it´s better to follow the lyrics of Do-Re-Mi, “Me, a name I call myself.” It’s just something we call it. It doesn’t truly define the thing that it is called. With football being so internationalized now and cross-cultural different names have different meanings in different places. And while the association with the thing can be important the stadium the match is played can be called anything as long as the football on the inside is good. It would be different if we started renaming clubs, or would it?

What do you think about renaming stadiums? Is it a travesty or who cares? Please send us your comments and thoughts. If you want to see a solid list of stadium names look here.