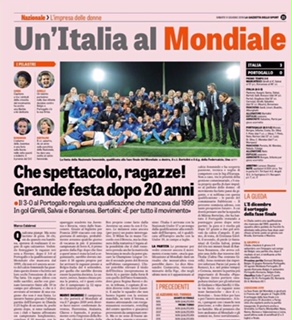 Can you believe Italy qualified for the World Cup? Yes, I said qualified.

Most of you are probably scratching your head right now. Considering that the tournament starts today and you’re positive Italy is no where on the list. That’s because you made the very common mistake of assuming I was talking about the Men’s World Cup, but in fact I’m talking about the 2018 Women’s World Cup in France. Where the AZZURE have qualified for the first time in 20 years.

History and the Game

The reason you are probably not as familiar with the women’s team is pretty much based on Italian history of the game. Football in Italy has not only a beautiful triumphant narrative, but it also has a dark and sexist side just like the history of the nation. Football and the national identity have been woven together so tightly in the last 120 years, it is hard to separate the two. From past to present, from the style of play to the vocabulary on the field, from internal realities to external influences, football has not only shaped the nation, it has championed masculinity and supported sexism and has unfortunately limited the success of the Women’s National Team.

Mussolini upon coming to power wanted to nationalize football so he took the name from Calcio Storico (a Medieval game played in Florence with very few similarities to today’s football) and even claimed that the English had reinvented the current game from the Italian version. During this era Italian football was put on the map by winning two World Cups and an Olympic gold medal and like all things Italian this too is controversial, many claim the referee made calls extremely favorable to the Azzuri in the 1934 World Cup.

Fascism is for the Boys

Among fascisms many ideologies, that of virility and anti-feminism are the ones most predominant in football today . It’s core principals favor traditional ways, fascism emphasized a hierarchical relationship between female and male relationships, one that was grounded in a patriarchal view of gender dynamics. The irony here is that the idea of a nuclear family and women’s role in the home is a modern invention created in the Victorian era and a representation of a bourgeois family, the antithesis of what Mussolini wanted. Arguments were made by the fascist government that the involvement of females in traditionally all-male workplaces would disrupt the power hierarchy that supported society. These ideas are clearly seen even today as expressed by Milena Bertolini, the women’s national team head coach, “I have been in football for 40 years. Football in Italy is the last men’s stronghold.”

It is possible this idea of a stronghold within football comes from the Italian style of play, catenaccio. A style which can be explained in three parts: a specific tactical system, a state of mind and cynicism. All three can be translated into a broader context and seen defending the male masculinity and thus denouncing women in a ‘man’s sport.’ As a tactical system Italians are known for their defensive line. Originally this brought an extra man to the back, the sweeper, and now a days sees the popular 3 back, but forces the outside midfielders to track back and defend ultimately at times becoming 5 in the back. This defensive mentality turns into a state of mind, Italians are always defensive. They defend their food, their language and above all they defend the stereotypical ideas of the role of men and women in society. Desiring women to have flour on their hands not mud and blood from the pitch.

Catenaccio is not the only word Italians have added to the football lexicon. The Italian language is a beautiful labyrinth of words and phrases sometimes so rich and deep in meaning it is  impossible to translate to English. And so is the language used on the football field, but no word is more distinctive to Italians than ‘Mister’ (pronounced ‘meester’) the honorary name given to every Italian coach. The true history of the name is unknown, most believe it came from England at some point. Today with the advent of the first female coach of a men’s national team, it is difficult to decide what to call her. “Well, to be honest, I don’t think that calling your manager ‘mister’ is sexist. It’s simply that there aren’t any other precedents, you see. There’s no alternative vocabulary because no women are managers. So we’ve always used the word, ‘mister’. There’s nothing disparaging about it when the lads call me, ‘mister’. It would be hard for them to call me by another name,” Patrizia Panico, coach of the U-16 (boys) Italian National Team. A word foreign to the Italian language, why must it be masculine? Why can’t it be just like the ambiguous word coach? So Italian critics believe soon female coaches will be called Miss. But is this truly necessary? If one forgets the English origin and leave it as is, it could put male and female coaches on an equal playing field rather than separating them and distinguishing the sexes like in the words calciotore, male player, and calciotrice, female player.

It is not surprising that many female players when seen on the field are considered to have masculine traits, such as short hair and wear their uniforms like their male counterparts. Football has been so imbedded into Italian culture that little girls like little boys grow up dreaming of being like their football idols that they see on TV and these idols are always men. Thus, little girls replicate what they see from men on the pitch.  While fascism is considered a thing of the past, the fear of the ‘Americanized, masculine women’ and the fear of homosexuality, is ever present in Italian society. Proven by the words of the president of the Italian Amateur Football Association (LND) after reportedly calling female footballers “a bunch of lesbians.” However, the new crop of female players such as Barbara Bonansea and Martina Rossucci let their femininity show on and off the field. Their sexual orientation should be of no concern to the fans. Do we ask male players if they are gay? And if they are, does that make them less good at their position on the field?

Whether Its Azzuri or Azzurre It’s Still The Same Color

Rather than look at the women’s qualification as a crushing blow to not only Italian society but possibly Italian masculinity, let’t look at it that Italy qualified for the World Cup 2018. This role reversal, the women go out to win a title while the men stay home (and hopefully cheer them on) might be exactly what Italy needs to swing some favor into the women’s corner. Hopefully Italians will break the cycle and stand up and support their women as they have their men’s team for so many decades. For in the end the women embrace the tactical side of catenaccio and wear the azzurri blue just as proudly as the men.